Also known as mung bean, green bean(绿豆lu dou) is a traditional food for Chinese people. Green beans soup is a delicious dessert and can cool the system and reduce huoqi (“fiery energy”), preventing malicious forces from penetrating the body. It is eaten to help dispel internal heat, clear away toxins, promote urination and relieve hot weather ailments and rashes.

The dessert soup is made my soaking dried mung beans over night in water and then boiled with palm sugar and pandan leaf. The soup is clear and green. You can drink the soup and leave the beans.

If the purpose of you making the green bean soup is for detox, then cooking until the beans are soft and liquid is cloudy. Then eat the beans and the soup.

Mung beans are good for most people - most people have "neutral" constitutions. Although it is beneficial to our health, it is not suitable for those who has a "cold" (too much yin energy), for women who have white discharge, for women who are about to have menses or who are having menses. Young children and old folks can eat in moderate amount but not too regularly (detox at least once a month is a good thing to do). Also, as mung beans expel toxins, it may decrease the effectiveness of some medicine. It is advisable not to eat mung beans less than half an hour before or after taking TCM or Western medicine.

If you want to avoid the adverse effect of mung bean, instead of making green bean soup, you can cook green bean porridge. Wash the rice and green bean clean, then put them together in the pot with water. Boil until it becomes the porridge.
Labels: Diet 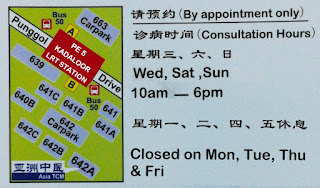